Radio #2: The Johns – Control and Authenticity 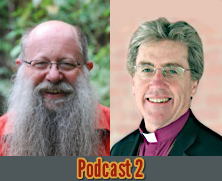 Click here for the Word for Word program Page

Rev Dr John Capper is an Anglican minister with a history of educating students at both evangelical and traditional theological schools. He was a minister in a largely aboriginal community and completed a PhD at Cambridge. In recent years he has acknowledged his concerns about the negative view held by many Christians about homosexuality, and argued that these views need careful consideration. He has moved from keeping an embarrassed silence to supporting moves for understanding. He has quietly helped many LGBTI students who have asked for his input on these matters, while seeking to avoid bringing his employers into disrepute from their conservative constituents. He is lauded by many of Melbourne’s evangelical pastors as a theological authority.

Bishop John McIntyre is the Anglican bishop of Gippsland and has also taught at conservative and traditional Anglican colleges. He openly advocated for the rights of LGBTI people and women’s ordination in the Sydney Anglican diocese while working in the inner suburban parish of Redfern for 15 years(!). He recently faced controversy as he ordained an openly gay priest in Gippsland.

In this episode, Dean Beck continues to explore the naked truth behind the evangelical ex-gay movement.

Many of Australia’s evangelical leaders still preach that homosexuality is an abomination and a sign of depravity. There is a culture of fear surrounding the many secretly pro-gay leaders working in Australian evangelical churches. Standing up and speaking out against homophobia can cost people their livelihood, their community and family. Yet while quotes from Leviticus continue to emanate from the pulpit, many of the theologians who teach these pastors are themselves shifting their stance and renouncing homophobia.

Our guests today are two such theologians.  They have come forward to offer a new perspective and to reach out to their fellow evangelical leaders. Bishop John McIntyre, the Anglican bishop of Gippsland, and Reverend Dr John Capper are two of Victoria’s most respected theological educators and what they have to say leaves no doubt as to why a painful divide still remains within the Church.

Both have worked in disadvantaged communities; studied widely, and educated evangelical church leaders. Both have embraced LGBTI-affirming theological positions and both have engaged pastorally and biblically with Christians who are gay. Why and how did they make the decision to come forward? How have they been treated as a result of their views despite being clear experts in biblical scholarship, theology and pastoral care?