WHAT IS EX-GAY AND WHY SHOULD IT END

Our Partners at JOY 94.3 have recorded a series of interviews looking into the devestating and far reaching effects of Ex-Gay Ideology

Literature speaking on the intersection of Faith, Sexuality and Religion.

Documentaries and Film about the Ex-Gay Movement and LGBTI people of Faith.

The ex-gay movement operates throughout the world. Motivated by rigid interpretations of the bible, sponsored by evangelical churches, and often funded by its victims, the movement boldly proclaims that trans and same-sex attracted people are broken, disordered, damaged by human sin, or all of the above! The ex-gay movement aims to promote celibacy to same-sex attracted people and, in many cases, promotes practices and therapies that seek to convert homosexuals into heterosexuals. Sadly, the movement has left a trail of suicides and broken relationships in its wake.

The last 50 years have seen evangelical Christians struggle to grapple with the reality of same-sex attraction. While gays and lesbians were originally ostracised by the church, evangelical groups devoted to curing same-sex attraction developed in the 1960s and 70s leading to the ex-gay movement that exists today. This movement is based on ideas that paint LGBTI people as damaged and dysfunctional. While it seems an attractive solution to the clash between evangelical culture and same-sex attraction, it is increasingly being recognised that the ideas behind ex-gay are at odds with traditional Christian ethics and the central themes of Christian tradition.

The ex-gay movement appears to offer a tried-and-tested formula for altering people’s sexual orientation. However, there is no evidence to substantiate its claims. In fact, almost all of those who claim to have experienced a change in sexual orientation admit to still having same-sex attraction – an example of the way in which the movement often misuses labels of gender, same-sex attraction, bisexuality and transgender – and almost all proponents of the ex-gay movement during the 1980s and 1990s have since renounced it. Despite this, the movement goes to great lengths to mask this ineffectiveness and has managed to maintain a strong presence in Australia.

The public conversation about ex-gay therapy can been confusing. It has been represented as simplistic, complex, grounded in psychology, abusive, benign, sincere, deceptive, deadly, ridiculous, insignificant and laughable. However, the raw theory behind ex-gay therapy – particularly the evangelical version – is surprisingly consistent across ex-gay groups and organisations. A great example of it can be found at the Living Waters Australia website. (UPDATE: This page has been removed. A copy of the content can be found here.)

The theory of ex-gay claims that people are not born gay but experience harmful influences in their early life – usually before they can remember – that cause them to develop same-sex attraction as they enter adolescence. Depending on the therapy organisation or counselling practice, homosexuality might be viewed as:

It’s not surprising that ex-gay therapy often leads LGBTI people to re-examine their childhood memories in an attempt to create a link between painful childhood events and later same-sex attraction. This then leads ex-gay participants to internalise a deep sense of dysfunction and damage that spreads to other areas of life. Listen to Radio #1 to learn more about this destructive process.

It is common for ex-gay organisations to view same-sex attraction as an ‘addiction of thought’ – even if the ex-gay therapy participant has never had a sexual experience. Many groups treat homosexuality using the same techniques as substance abuse recovery programs. Creating a link between homosexuality and addiction as a blanket rule for all same-sex attracted people is not only offensive – it’s dangerous.

The majority of ex-gay practice does not occur in organised ex-gay groups but in counselling rooms and pastoral offices. Many of the proponents of these practices are not openly truthful about their adherence to ex-gay ideology and do not always use branded ex-gay resources. In Australia, there are no restrictions on ex-gay concepts being communicated online or in media. There are minimal restrictions in educational settings. The counselling industry is not regulated and there are therefore no laws preventing ex-gay therapy, other than the limited investigatory powers granted to the Victorian Health Complaints Commissioner in 2016.

Ex-gay therapy happens in registered religious organisations, through informal arrangements within churches, synagogues or mosques, and at private counselling or psychology practices. In areas with large evangelical populations, organised groups are often run by trained mental health professionals with a conservative religious background. Some American state governments – like California and New Jersey – have legislated against ex-gay therapies directed at minors. The largest ex-gay organisation, Exodus International, recently shut its doors and apologised for the harm it had caused to LGBTI people. In April 2014, Australia saw the closure of Living Waters, one of the last public faces of the reparative therapy movement. The state of Victoria, Australia, introduced legislation in 2016 giving powers to a Health Complaints Commissioner to investigate reports of ex-gay therapy in registered therapeutic environments. This legislation will come into effect in early 2017 and will not be bound by age.

But don’t be fooled – the ex-gay idea is still alive in Australia and around the world. It’s pushed by counsellors and religious leaders and it doesn’t take much to discover that being gay and Christian in Australia can still be fraught with pain, rejection and the pressure to change. Even in 2016, three years after the Inside Ex-gay project began, LGBTIQ Christian support groups across Australia continue to report new cases of ex-gay therapy, secret ex-gay social media groups, and even ex-gay conferences. Same-sex attracted men and women who were coerced into opposite-sex relationships many years ago are only now working up the strength to seek help.

The ex-gay movement has attracted increased media attention – from Sydney to San Francisco to Saint Petersburg – through documentaries, radio programs, social media and news media. So when a former ex-gay participant – Melbourne man Damien Christie – took his life in 2013, the producers of the Inside Ex-gay project decided to look at the movement in a fresh light and with some new voices.

What resulted was the coming together of 8 ex-gay survivors, Christian leaders and counsellors for 4 extraordinary radio interviews. This has since expanded to 6 interviews featuring the voices of pivotal straight Christian allies. Their message: Whether you are progressive, conservative, evangelical or non-religious, the ex-gay movement is damaging and misguided.

The podcasts, YouTube playlists and videos on this site aim to expose the ex-gay phenomenon and bring hope to the many young Australians of faith who may believe they are damaged, dysfunctional or defective because they are lesbian, gay, bisexual, transgender or intersex (LGBTI).

INSIDE EX-GAY IN THE MEDIA

Inside Ex-gay producer Nathan and Radio Show #2 guest Rev Dr John Capper were guests on Joy’s Spirit Lounge Program to discuss Inside Ex-gay on 13 April, 2014. Click here for the Program page or play the audio below:

Inside Ex-gay believes the following actions are required in Australia to address the ex-gay idea. The producers of the project aim to work with local organisations to advocate for these actions.

A great media representation of the cultural, regulatory, organisational and religious complications stated above is: 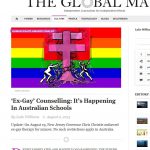